“The art of teaching is the art of assisting discovery.” –  Mark Van Doren

Born on this date in 1894, Van Doren was an American poet, writer, critic, scholar and professor of English at Columbia University for nearly 40 years. There he inspired a generation of influential writers and thinkers, including Thomas Merton, Allen Ginsberg and Jack Kerouac.

In addition, he served as literary editor and film critic 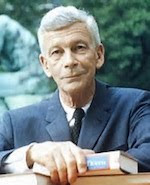 of  the New York City-based magazine The Nation, the oldest continuously published literary magazine in the U.S. .   His influence and body of work were recognized by The Library of Congress when he was made a Fellow in American Letters and then elected president of the American Academy of Arts and Letters.

Van Doren wrote many of the books studied by up-and-coming writers in colleges and universities across the nation, produced the award-winning verse play The Last Days of Lincoln, and won the Pulitzer Prize in poetry for his 1940 book Collected Works 1922-1938, joining older brother Carl as one of the few sibling combinations to win the award (Carl won in 1939).

But, despite his many successes in other genres, Van Doren always considered himself first and foremost to be a poet.   “The job of the poet is to render the world - to see it and report it without loss, without perversion,” he wrote shortly before his death in 1972.   “No poet ever talks about feelings. Only sentimental people do.”

Share A Writer’s Moment with a friend by clicking the g+1 button below.
Posted by A Writer's Moment by Dan Jorgensen at 5:04 AM