“I think any writer keeps going back to some basic theme. Sometimes it's autobiographical. I guess it usually is.” –  Joe Haldeman

Many of Haldeman's works, including his debut novel War Year and his second novel The Forever War, were inspired by his experience serving in the Vietnam War –  where he was wounded in combat – and by his adjustment to civilian life after returning home.  But while he used his war experience to start as a writer, it’s been his skill fashioning works of science fiction that have highlighted his career and a place in the Science Fiction Writers Hall of Fame.

Winner of numerous Hugo Awards (a top award in science fiction) for novels, short stories and novellas, this Oklahoma native also had a most interesting idea – weaving together a story of an attempt to produce a fake Ernest Hemingway manuscript with themes concerning time travel and parallel worlds.  That one won both a Hugo and a Nebula.

The author of 20 novels and many collections of stories and essays, in a recent interview he called himself “Jack of all trades and master of none.”  Regardless, he’s earned 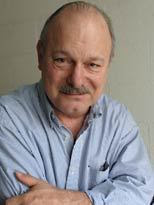 many, many admirers and been a leader in the Sci-Fi world, including being selected by the Science Fiction Writers of America officers and past presidents for its coveted “Grand Master” designation.

Share A Writer’s Moment with a friend by clicking g+1 below.
Posted by A Writer's Moment by Dan Jorgensen at 5:25 AM