“Fans are always asking me where I get my ideas from. The answer is that I'm very curious, and I get inspiration from everywhere. I read the newspapers voraciously, so I know what's going on in real crime. I pay attention to the strange stories people tell me, and I also read a lot of scientific and forensic journals.” – Tess Gerritsen

Born on this date in 1953 Tess Gerritsen is the best-selling author of the Rizzoli & Isles series, which also has been made into the very popular TV series.  A native of San Diego, she is the child of a Chinese immigrant and a Chinese-American seafood chef, who grew up wanting to write her own Nancy Drew type novels. “I'd been writing stories since I was a child,” she said.   “I wrote little books for my mom and bound them myself with needle and thread. Mostly, they were about my pets.”

Although she longed to be a full-time writer, her family had reservations about the sustainability of a writing career, prompting Gerritsen to choose a career in medicine instead.  Ultimately, of course, that knowledge of medical procedures proved invaluable in her writing, especially when writing about the Maura Isles character, who is a medical    examiner.  Although she didn’t start writing until her mid-30s, Gerritsen’s books have been published in 40 countries and have sold 25 million copies.

In addition to her detective and mystery books, she
has contributed essays in volumes published by 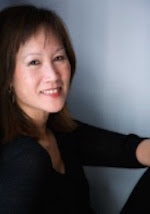 Mystery Writers of America and International Thriller Writers. She also blogs regularly about the writing business, both on her own website and on the mystery writers site, Murderati.com.
“Even if I never sold another book, I'd keep writing, because the stories are here, in my head.  Stories that just need to be told,” she said.  “I love watching a plot unfold, and feeling the surprise when the unexpected happens.”

Share A Writer’s Moment with a friend by clicking the g+1 button below.
Posted by A Writer's Moment by Dan Jorgensen at 4:15 AM