Leading the joy of learning

“Language is a living thing. We can feel it changing. Parts of it become old: they drop off and are forgotten. New pieces bud out, spread into leaves, and become big branches, proliferating.” –  Gilbert Highet

A Scottish-American classicist, academic, writer, intellectual, critic and literary historian, Gilbert Highet was born on this day in Glasgow, Scotland, in 1912.  While studying there he met his future wife, the great writer Helen MacInnes.  They came to the U.S. where, in 1938, he was named head of the Greek and Latin Department at Columbia, where he would stay until 1971, just a few years before his death.  Both Highet and MacInnes later became naturalized U.S. citizens.

Highet devoted most of his energy to teaching, but he also aspired to raise the level of mass culture and achieved broader influence by publishing essays and books, hosting his own radio program, acting as a judge for the Book-of-the-Month Club, and serving on the editorial board of Horizon magazine. 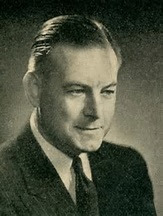 When asked why he liked teaching, he remarked "The chief aim of education is to show you, after you make a livelihood, how to enjoy living; and (how) you can live longest and best and most rewardingly by attaining and preserving the happiness of learning."

With a presence comparable to that of Laurence Olivier or John Houseman and a powerful and speculative mind, he was noted for giving his students an extraordinary intellectual experience.  For an amazing look at the art of teaching, read his 1976 book The Immortal Profession: The Joys of Teaching and Learning.

Highet loved the process of writing and the end results, especially the books from which he taught his thousands of students the joys of understanding what lie between each book’s covers.  “(Books) are not just lumps of lifeless paper,” he said, “but minds alive on the shelves.”

Share A Writer’s Moment with a friend by clicking the g+1 button below.
Posted by A Writer's Moment by Dan Jorgensen at 6:03 AM