It's about what you want to know

“The one thing that makes writing a better pastime than reading is that you can make things turn out the way you want in the end!” –  Geraldine McCaughrean

British children's novelist McCaughrean, born on this date in 1951, has written more than 160 books and her work has been translated into 45 languages worldwide.  But despite all that success, she may be known best for writing the authorized sequel to Peter Pan in 2006.
Beloved by kids everywhere, she said she appeals to kids because she empowers them.  “The chief thing is to make children feel good about themselves,” she said. “They want to step into the shoes of a hero who is bigger and stronger, to face tremendous dangers and come home safely for tea.”
Intending to be a teacher, this London native instead found her true vocation in writing while still debating where to go to school and for what major.  She claims that what makes her love writing is the desire to escape from an unsatisfactory world.  Her motto: Do not write about what you know, write about what you want to know. 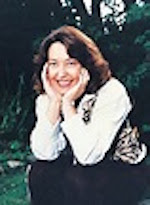 “I never dreamt I could be an author when I grew up,” she said.  “It just didn't occur to me, because I thought you had to be a) academic, so go to university, things like that, and I didn't think I was clever, or b) dead because I just assumed all the authors in the library were dead.”

Share A Writer’s Moment with a friend by clicking g+1 below.
Posted by A Writer's Moment by Dan Jorgensen at 6:47 AM