Hero of your own story

“We all live in suspense from day to day; in other words, you are the hero of your own story.” –  Mary McCarthy

Author, critic and political activist, Mary McCarthy was born on this day in 1912 in Seattle, WA, and built her reputation as a satirist, primarily with her satirical 1963 novel The Group, which remained on the New York Times Best Seller list for almost two years.

Noted for her precise prose and its complex mixture of autobiography and fiction, she also was considered a rather “scandalous” writer in her younger years, especially with her first novel The Company She Keeps, which “told it like it was” in 1930s New York Society.

Winner of two Guggenheim Fellowships and a number of other major “funding” awards, she was named for the National Medal for Literature and
the Edward MacDowell Medal, both in 1984 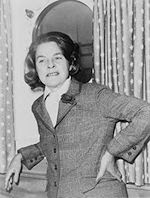 and just on the cusp of learning that she had lung cancer.  During her later years, in recognition of her groundbreaking work, she was presented with 8 honorary degrees from some of America’s leading universities.

A respected critic, she was often feuding with other leading writers over her frank and often not-so-flattering reactions to their works.  And, as for her own writing, she said she often surprised herself with their outcomes. “The suspense of a novel,” I think,  “is not only for the reader, but in the novelist, who is usually intensely curious about what will happen to her hero.”

Share A Writer’s Moment with a friend by clicking the g+1 button below.
Posted by A Writer's Moment by Dan Jorgensen at 5:31 AM