A great idea finding its time

“A great idea is usually original to more than one discoverer. Great ideas come when the world needs them. Great ideas surround the world's ignorance and press for admission.” – Elizabeth Stuart Phelps
An early feminist American author and intellectual, Phelps (born on this date in 1844) was the daughter of a Congregational minister and writer mother.  She began her own writing as a young girl and was noted for her “gift for telling stories.”   One source noted, "She spun amazing yarns for the children she played with.  And her schoolmates of the time and a little farther on talk with vivid interest of the stories she used to improvise for their entertainment.”  At age 13, she had a story published in the national reader Youth's Companion, and from that point through her teens her youth stories appeared in various national publications.

As an adult, after studying at Abbot Academy, she continued her writing career and became one of America’s most popular writers.  In addition to her hundreds of short stories, she penned 57 volumes of fiction, poetry and essays.  In all of these works she challenged the prevailing view that woman's place and fulfillment resided in the home. Instead Phelps' work depicted women as succeeding in nontraditional careers as physicians, ministers, artists and, of course, writers.
She was widely sought after as a speaker, and in 1876 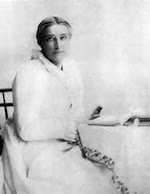 she became the first woman to present a lecture series at Boston University on the topic “Representative Modern Fiction.”

A modest person despite her great successes and influence, she noted, “It is not the straining for great things that is most effective; it is the doing the little things, the common duties, a little better and better.”

Share A Writer’s Moment with a friend by clicking the g+1 button below.
Posted by A Writer's Moment by Dan Jorgensen at 8:24 AM