Using humor to soften the blow

“The American press has the blues. Too many authorities have assured it that its days are numbered, too many good newspapers are in ruins.” –  Russell Baker

Baker, who turns 91 today, is an American writer known for his satirical commentary and self-critical prose while writing primarily for The New York Times.   Often, his biting commentary would include elements of humor that made even those who disagreed with him want to read on to see what he might have to say.  “Serious journalism need not be solemn,” he noted.
He won a Pulitzer for his commentary and then won another for his autobiography Growing Up. He also hosted the PBS show Masterpiece Theatre from 1992 to 2004.

A 1947 graduate of Johns Hopkins University, Baker decided to become a writer because, as he said in his usual disparaging way, "what writers did couldn't even be classified as work."   His writing covered the spectrum, including a time when he was going to be a poet.  But, “I gave up on new poetry … when most of it began to read like 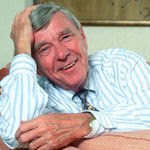 coded messages passing between lonely aliens in a hostile world.”

Thus, his primary work was in journalism, although he also was an essayist, a noted biographer and one-time  playwright for Home Again, Home Again. He wrote or edited 17 books, and in recognition of his long and successful career, he was named a Fellow of the American Academy of Arts and Sciences.

Baker also was a strong advocate for what might be considered a dying art – writing letters.  “A man writing a letter,” he said, “is a man in the act of thinking.”

Share A Writer’s Moment with a friend by clicking the g+1 button below.
Posted by A Writer's Moment by Dan Jorgensen at 5:36 AM