“Research to me is as important or more important than the writing. It is the foundation upon which the book is built.” –  Leon Uris

Born on this day in 1924, Uris started writing early – his first effort being an operetta about the death of his dog at age 6.  But he struggled with language, eventually failing English 3 times in high school before dropping out at age 17.

A native Virginian, he was the son of immigrant parents and anxious to show that he was “a true American.”  Thus, when the Japanese bombed Pearl Harbor, he convinced his parents to let him sign up for the Marines.  Serving in the South Pacific, he fought in many battles, including Guadacanal – the basis for his first novel, (which I loved as a kid) Battle Cry.  “That book was rejected 9 times,” he said later, “but it turned out to be a huge best seller.”

“I enjoyed writing,” he said.  “ I think that most 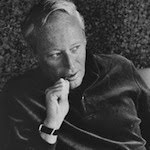 writers will tell you about the agony of writing more than the joy of writing, but writing is what I was meant to do.”  In 1958 he wrote one of the all-time great books, Exodus, about the modern day founding of the state of Israel.  It became an international publishing phenomenon, the biggest best seller in the United States since Gone With the Wind and number one on the New York Times bestseller list for two years.

He wrote a number of other top sellers and many screenplays based on his works over the next two decades and then had another blockbuster, Trinity, about Northern Ireland’s longtime Catholic-Protestant “troubles.”   Despite battling a debilitating renal illness, he continued writing until just weeks before his death in 2003.

“While you can try to reach an audience,” he said about his successes,  “you just write what comes out of you and hope that it is accepted.”

Share A Writer’s Moment with a friend by clicking the g+1 button below.
Posted by A Writer's Moment by Dan Jorgensen at 4:55 AM