Roosevelt's commentary still on the mark

“A typical vice of American politics is the avoidance of saying anything on real issues.” –  Theodore Roosevelt

Even 125 years ago American statesman, author, explorer, soldier, naturalist, and reformer Theodore “Teddy” Roosevelt was right on the mark with his observance of what makes politics so frustrating for the average citizen.

This past weekend I had the chance to see and read more about our 26th President – who has an integral role in my novel And The Wind Whispered – while visiting family and friends in Washington, DC.  One of our stops was at the National Portrait Gallery where we saw portraits of all of our Presidents, and read more about what they had to say about their times in office.  I also took the opportunity to “pose” with Theodore for this photo. 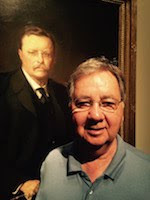 Then, much to my surprise, the very next day
while visiting one of our DC area national parks, 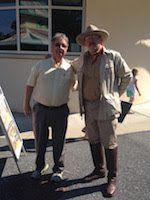 who should be making the rounds than old Teddy himself.  He graciously agreed to pose with me and talk about my book and what “his role” was within its pages, reminding me that he, too, was a writer, which might be an understatement at best.

In his liftetime, Roosevelt was a prolific author, writing with passion on subjects ranging from foreign policy to the importance of the national park system. Roosevelt was also an avid reader of poetry. Poet Robert Frost said that Roosevelt "was our kind. He quoted poetry to me. He knew poetry." Roosevelt wrote 18 books (each in several editions), including his autobiography and left us with myriad inspirational examples of how to live life and sayings on the same.

“Believe you can,” Roosevelt advised, “and you're already halfway there.”