“I have no favorite genre or style but treat each novel with the same care, imagination and craftsmanship. It's as difficult to write a crime or a children's novel with a touch of style and grace as it is a literary novel.” – Garry Disher

Australian author Garry Disher knows of what he speaks, since he has been one of the world’s most noted authors of both crime fiction and children's literature.

Born this week in 1949, he grew up on his parents' farm in South Australia and began his writing career while still in college – first in Adelaide, then in Melbourne universities.  In 1978, in recognition of his growing skill in the writing world, he was awarded a creative writing fellowship to Stanford where he wrote his first short story collection.
Disher travelled widely overseas before returning to Australia, where he has taught creative writing, but mostly doing writing full time since 1988.  He has written more than 40 crime fiction and children's books, but in recent years he’s also gained recognition for his books about the craft of writing.  Having read through some of his pieces, I highly commend them to anyone seeking to become a writer or advance a career as a writer.  The books are chock full of great advice, examples and just good common sense that many writers sometimes overlook in their haste to get the words down on paper. 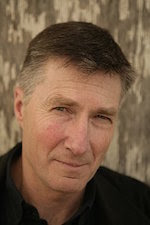 For a wonderful look at terrific Young Adult fiction, take a look at his The Devine Wind, and for a great example of the best in crime fiction, read his “Challis/Destry” series, especially Chain of Evidence, which won Australia’s Ned Kelley Award for best crime novel.

“A good writer can set a thriller anywhere and make it convincing: the trick is to evoke the setting in such a way that it highlights the crime or unsettles the reader.”

Share A Writer’s Moment with a friend by clicking the g+1 button below.
Posted by A Writer's Moment by Dan Jorgensen at 5:20 AM