A testament to perserverence

“Somewhere along the line, I realized that I liked telling stories, and I decided that I would try writing. Ten years later, I finally got a book published. It was hard. I had no skills. I knew nothing about the business of getting published. So I had to keep working at it.” –  Janet Evanovich

Born April 22,1943, Evanovich now has over two hundred million books in print worldwide and is translated into over 40 languages.  After those initial struggles, she gained fame and loyal readers with her contemporary mysteries featuring Stephanie Plum, a former lingerie buyer from Trenton, New Jersey, who becomes a bounty hunter to make ends meet after losing her job.

Evanovich’s writing has combined a terrific and sometimes droll sense of humor (“If you want to cry, you're not going to like my books”) with a knack for setting up mystery, suspense and keeping her readers totally involved.  “I actually really suck at naming books, so lots of years ago, readers were sending in their ideas for titles,” she explained. 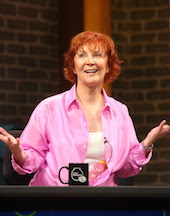 “What we realized is that they were smarter than us. So we thought, Hey, go for it. So now we have a contest every year.”

Evanovich is testament to perserverance and not giving up.  During those first 10 years of trying she had dozens and dozens of rejection letters for her first books before she finally connected with a romance novel for which she received $2,000.  “I thought it was an astounding sum,” she recalled.  Today, just after her 73rd birthday, she is worth $120 million.

Share A Writer’s Moment with a friend by clicking the g+1 button below.
Posted by A Writer's Moment by Dan Jorgensen at 5:58 AM