“I tell my students you have an absolute right to write about people you know and love. You do. But the kicker is you have a responsibility to make the characters large enough that you will not have sinned against them.” –  Dorothy Allison
Allison, born on this date in 1949, held a wide variety of jobs before gaining success as a writer.   After growing up poor in South Carolina, she simultaneously put herself through college while working as a salad girl and a maid.  After getting her degree she also worked as a nanny and a substitute teacher, and helped establish a feminist bookstore in Florida.  She is a testament to persistence and following your writing dream, also working at a child-care center, answering phones at a rape crisis center, and clerking for the Social Security Administration.

It was while doing training at the SSA during the day that she started writing, returning to her motel room to write stories on yellow legal pads at night.  Her intense and highly personal writing often focuses on her life experiences, including sexual abuse by her stepfather, and dealing with
crushing poverty.  And while she has had 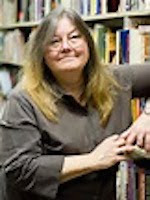 success with her work, particularly the National Book Award finalist Bastard Out Of Carolina, she said she always wrote first for herself and those close to her knowing that her work might not gain wide following.

Now a resident of California, she has been a teacher at several colleges and universities.  “I'm still very blunt: If you want to be a writer, get a day job,” she advises beginning writers.  “The fact that I have actually been able to make a living at it is astonishing.”

Share A Writer’s Moment with a friend by clicking g+1 below.
Posted by A Writer's Moment by Dan Jorgensen at 7:03 AM