“No one can teach writing, but classes may stimulate the urge to write. If you are born a writer, you will inevitably and helplessly write. A born writer has self-knowledge. Read, read, read. And if you are a fiction writer, don't confine yourself to reading fiction. Every writer is first a wide reader.” –  Cynthia Ozick
A native New Yorker born on this day in 1928, Ozick writes about Jewish American life,  politics, history, literary criticism, The Holocaust and its aftermath.  Much of her work explores the disparaged self, the reconstruction of identity after immigration, trauma and movement from one class to another.

The author of 6 novels, 7 short-story collections and 7 books of criticism, Ozick received a National Jewish Book Council Award for lifetime achievement  in 2010, was a finalist for the National Book Award (for her Puttermesser Papers), won both the PEN/Nabokov and PEN/Malamud Awards, and earned the Presidential Medal for the Humanities. Her short stories have won multiple O. Henry first prizes and her works have been translated into 17 languages.

Ozick’s lyrical fiction style also has earned such accolades as “The greatest living American writer” (from several of her contemporaries), and the title 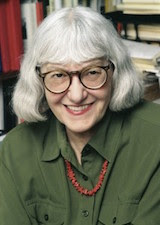 “The Emily Dickinson of The Bronx.”  Meanwhile, her essay style has been called everything from “uncompromising” to “biting” to “brilliant.”  She is one of the world’s definitive writers on American author Henry James.

“In an essay, you have the outcome in your pocket before you set out on your journey, and very rarely do you make an intellectual or psychological discovery,” she said in talking about why she likes both genres.  “But when you write fiction, you don't know where you are going - sometimes down to the last paragraph - and that is the pleasure of it.’
Share A Writer’s Moment with a friend by clicking g+1 below.
Posted by A Writer's Moment by Dan Jorgensen at 5:56 AM