The luxury of 'deadlines lost'

“The deadlines are much, much longer with books. When I was a reporter, a lot of times I'd come in at 8:30 a.m., get an assignment right away, interview somebody, turn the story in by 9:30, and have the finished story in the paper that landed on my desk by noon.” – Margaret Haddix

Anyone who’s ever worked in journalism – particularly on “breaking news” – knows the reporter’s routine about which Margaret Haddix is speaking.  “Write tight and write quick” are the daily mantras for reporters.  The native Ohion (born on this day in 1964) studied at Miami of Ohio before starting her writing career as a reporter in Indiana – writing for newspapers in both Fort Wayne and Indianapolis before making her very successful switch to creative writing in the mid-1990s.

Today she’s best known for her series’ Shadow Children (1998–2006) and The Missing (2008-present) and her best-selling books Running Out of Time and The Girl With 500 Middle Names.  Since switching from journalism to creative writing she has authored more than 30 books and won the 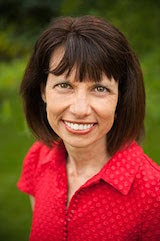 As most journalists know, creative writing is a luxury after dealing with the daily deadlines of the reporting world.  “Generally I finish a first draft in 2-6 months, then I set it aside for a while so that when I come back to it I can read it with fresh eyes and figure out how to improve it.  (In creative writing) I can spend as long revising a manuscript as I spent writing it in the first place.”

After two decades as a creative writer, she said she prefers the style.    “It's just so much fun to make up characters, situations, and everything else about a story,” she said.  “I have so much freedom and flexibility to do whatever I want.”

Share A Writer’s Moment with a friend by clicking g+1 below.
Posted by A Writer's Moment by Dan Jorgensen at 6:07 AM