“When writing I set myself 600 words a day as a minimum output, regardless of the weather, my state of mind or if I'm sick or well. There must be 600 'finished' words--not almost right words.” – Arthur Hailey

A British/Canadian novelist, Hailey's works have sold more than 170 million copies in 40 languages.  Most are set within one major industry, such as hotels, banks, or airlines, and explore the particular human conflicts sparked by that environment. His novels are notable for their plain style, extreme realism based on detailed research, and a sympathetic down-to-earth hero with whom the reader can easily identify.

Born in England, he had a distinguished career in the Royal Air Force during World War II and then began writing after the war was over, moving to Canada where he established residency.  In the last decade of his life he also lived in The Bahamas and it was there that he died in 2004.  He first wrote as a journalist and then came up with his first novel, a “what if?” scenario about both pilots on a long-distance flight coming down with food poisoning.  The resulting book, Runway Zero-Eight, began as a television movie script and then was expanded into his first best-selling novel.

Born on this date in 1920, Hailey’s most famous books Hotel and Airport also became top-grossing movies.  For those of us who have tackled historical fiction, 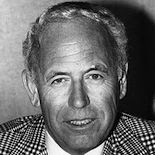 his are models to emulate bringing together many “real-life” people with protagonists he invents to act as the glue to bring them all together in a wonderful storyline.  Hailey, however, begs to differ that his “invented” characters are made up.  “I don't think I really invented anybody,” he said.  “I just drew on real life.”

Share A Writer’s Moment with a friend by clicking g+1 below
Posted by A Writer's Moment by Dan Jorgensen at 5:44 AM