Heads (and voice) above the crowd

“The man who can speak acceptably is usually given credit for an ability out of all proportion to what he really possesses.  The ability to speak is a short cut to distinction. It puts a man in the limelight, raises him head and shoulders above the crowd.” – Lowell Thomas

Born on this date in 1892, Thomas was a renowned speaker, mostly in broadcasting, but he also was a gifted writer and has the distinction of making Lawrence of Arabia famous.

Thomas traveled as a war correspondent to Palestine during World War I where he met T. E. Lawrence, a captain in the British Army in Jerusalem.  Thomas shot dramatic film footage of Lawrence with his Arab troops, and after the war he toured the world, narrating his film With Allenby in Palestine and Lawrence in Arabia and making Lawrence—and himself—household names.
Lowell Thomas in Afghanistan in the 1920s  . 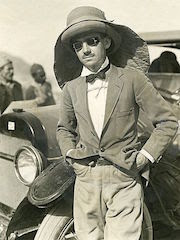 Also magazine editor for a time, Thomas joined the young and growing business of broadcast news in the 1920s.  After “talkies” made the movie scene, he narrated the weekly “Movietone” newsreels for 20th Century Fox, further making his name the most well-known in America, if not the world.  A newscaster for both CBS and NBC, his signature signoff was “So Long, Until Tomorrow,” which also became the title of his two-volume best-selling memoir.

A tireless worker, he advised to, “Do a little more each day than you think you possibly can.”  He did radio – his chosen medium after trying and disliking television – until his death at age 89.  He was on air longer than any other announcer until Paul Harvey came onto the scene.  Thomas liked to tweak himself at times as being too caught up in reminiscing.  “But,” he laughed, “after the age of 80, you know, everything reminds you of something else.”

Share A Writer’s Moment with a friend by clicking g+1 below
Posted by A Writer's Moment by Dan Jorgensen at 5:17 AM