Be proactive on your story's behalf

“I think writers have to be proactive: they've got to use new technology and social media. Yes, it's hard to get noticed by traditional publishers, but there's a great deal of opportunity out there if you've got the right story.” – Ian Rankin
Rankin, the Scottish crime writer best known for his “Inspector Rebus” novels, did not set out to be a crime writer and, in fact, didn’t think he had “the right story” at first.  He thought his first novels Knots and Crosses and Hide and Seek were more “mainstream,” keeping with the Scottish traditions of Robert Louis Stevenson and even Muriel Spark.   And he said he was a bit disconcerted by their classification as “genre fiction,” worrying they might not draw a reading audience.

Not to worry.   So far, he’s had 25 books published and 10 of them have not only been best sellers, but have been adapted for television movies – a record most writers would love to have.  Rankin celebrates his 56th birthday today at his home in Edinburgh where he sets most of his novels.  One of the fun things about reading his books is to learn more about that Scottish city and the little details he weaves throughout.

Rankin, whose first job was in his dad’s grocery store,
had lots of “life experiences” (always a plus for a writer) 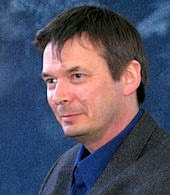 before becoming a full-time novelist.  He worked as a grape-picker, swineherd, taxman, alcohol researcher (I’d definitely like to hear more about that job), hi-fi journalist, college secretary, and punk musician in a band called The Dancing Pigs.

“I am, of course, a frustrated rock star - I'd much rather be a rock star than a writer,” he said.  “Or own a record shop. Still, it's not a bad life, is it? You just sit at a computer and make stuff up.”   Pretty good “stuff” too.

Share A Writer’s Moment with a friend by clicking g+1 below.
Posted by A Writer's Moment by Dan Jorgensen at 5:28 AM