Always time to turn over a new leaf

“The next year, the next day, the next hour are lying ready for you, as perfect, as unspoiled, as if you had never wasted or misapplied a single moment in all your life.  You can turn over a new leaf every hour if you choose. “ – Arnold Bennett


Bennett, best known as a novelist, also worked in other fields such as journalism, propaganda and film.    The British writer was born in 1867 and had determined that he would be an editor before taking on a weekly syndicated column for his newspaper after being perplexed by the lack of good material from other writers.  He quickly discovered that he had a great knack for writing and by 1900 was devoting all of his time to his new profession.


One of his most popular non-fiction works, which is still read to this day, is the self-help book How to Live on 24 Hours a Day, from which the above quote comes.   Bennett wrote 30 novels and his The Old Wives' Tale, published in 1908, is considered one of the great works in English literature.  It gives us an in-depth look at 70 years in the lives of two sisters, following their stories from youth through old age, and also stands the test of time.  A very good read, especially for those interested in history and historical fiction.

Bennett also was acclaimed as a “discoverer” of other great writers and his reviews were highly sought after.   Reviewing a constant stream of new books, he unerringly picked out the important writers of the next generation—James Joyce, D.H. Lawrence, William Faulkner, Ernest Hemingway—and praised them discerningly.  He said, in his mind, everyone has “artistic” moments.  When looking for a photo of him to use here, I came across this combination photo and quote and thought it appropriate in that regard. 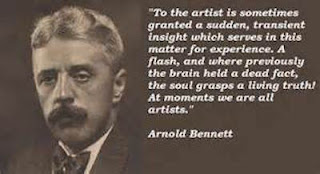 Happy weekend as you uncover your own artistic (and writer’s) moments.

Share A Writer’s Moment with a friend by clicking g+1 below.
Posted by A Writer's Moment by Dan Jorgensen at 5:08 AM