Inventing a field of dreams

“Most people write a lot of autobiography, but when I came to write autobiography I discovered that nothing interesting had ever happened to me. So I had to take the situation and invent stories to go with it.” –  W. P. Kinsella
William Patrick Kinsella, born on this date in 1935, is a Canadian novelist and short story writer whose work usually focuses on baseball, First Nations people, and other Canadian issues.  For a truly wonderful read about life on the First Nations’ Reserve in Kinsella’s home province of Alberta, check out Kinsella's book of short stories Dance Me Outside, his very first book from 1977. Narrated by a young Cree named Silas Ermineskin, it is a remarkable look at Reserve life, love, sorrow and triumph.

But while he writes poignantly and with great detail about the First Nations, it is for his 1982 baseball novel Shoeless Joe that he gained international acclaim.
Kinsella 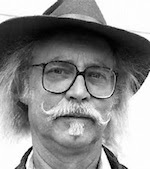 The book was mildly controversial in that it used the reclusive (and still living at the time)  author J.D. Salinger as one of its main characters, even though Kinsella  had never met him. "I made sure to make him a nice character so that he couldn’t sue me.” Kinsella said.    The best-selling book was later adapted into the wonderful 1989 Kevin Costner movie Field of Dreams, further cementing Kinsella’s reputation and making Costner a star.

“Most writers are unhappy with film adaptations of their work, and rightly so,” Kinsella said.  “But Field of Dreams caught the spirit and essence of Shoeless Joe while making the necessary changes to make the work more visual.”    Primarily set in Iowa it has one of the great literary exchanges when one of the old-time “spirit” ballplayers he creates emerges from a cornfield and asks the main character Ray if this is Heaven?  “No,” Ray answers.  “This is Iowa.”

If you haven’t read the book or seen the movie, I commend both to you – in that order.  You won’t be disappointed.  It's also a salute to the imagination and the creativity we have to make fields of dreams.

Share A Writer’s Moment with a friend by clicking g+1 below.
Posted by A Writer's Moment by Dan Jorgensen at 5:20 AM