“The need to write comes from the need to make sense of one's life and discover one's usefulness.” –  John Cheever
Born on this date in 1912, American novelist and short story writer John Cheever has been recognized as one of the most important short fiction writers of the 20th century.  A compilation of his mid-life writing, The Stories of John Cheever, won the 1979 Pulitzer Prize for Fiction and a National Book Critics Circle Award, and its first paperback edition in 1981 was named for the National Book Award.

A “natural” writer, he wrote his first short story and was published while still in his teens in New York City.  After dropping out of high school, he took  a job as a caretaker at a New York artist’s colony, continued writing and had a number of works published in prominent magazines like The New Yorker.   In the late ‘30s he worked for the government’s Writer’s Project before enlisting in the Army during World War II, when he had his first book of short stories published.  Ultimately he became a chronicler of both his times and the people he encountered, and was lauded for his keen, often critical, view of the American middle class.

His stories are characterized by his attention to detail, his careful writing, and his ability to find the extraordinary in the ordinary. 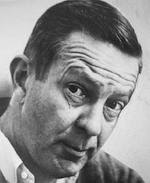 Always cognizant of his reading public and what they liked, he once said, “I can't write without a reader. It's precisely like a kiss - you really can't do it alone.”

Share A Writer’s Moment with a friend by clicking g+1 below.
Posted by A Writer's Moment by Dan Jorgensen at 6:01 AM