“Every individual ought to know at least one poet from cover to cover: if not as a guide through the world, then as a yardstick for the language.” – Joseph Brodsky
Born this date in 1940 in Leningrad, Brodsky first started writing at age 15, and getting published by the underground journal Sintakss (Syntax) before he was out of high school.  Those early works got him in deep trouble with both Stalin and his successor Nikita Khrushchev as being “anti-Soviet,” and by his late 20s he had been jailed, “confined” to a mental institution, and finally expelled from his homeland.  Luckily for the writing world, he came to live in the United States thanks to the  help of poet W. H. Auden.

From that point until his death in 1996, he taught writing and poetry at many different U.S. universities, including such institutions as Yale, Columbia and Michigan before becoming a full-time faculty member at Mount Holyoke College in Massachusetts. 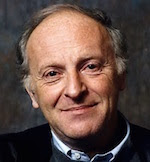 In 1987, Brodsky was awarded the Nobel Prize in Literature "for an all-embracing authorship, imbued with clarity of thought and poetic intensity.” And in 1991, he was appointed United States Poet Laureate, the first naturalized citizen to be so honored.

He said coming to America was the best thing that could have happened to him.  After living under totalitarianism and oppression, America was a breath of fresh air that renewed his spirit and belief in his fellow human beings. “Cherish your human connections: your relationships with friends and family,” he advised his students.  “Know how delightful it is to find a friend in everyone you meet.”

Share A Writer’s Moment with a friend by clicking g+1 below.
Posted by A Writer's Moment by Dan Jorgensen at 4:59 AM