Sometimes it's a roller-coaster ride

“If you have a craftsman's command of the language and basic writing techniques you'll be able to write - as long as you know what you want to say.” –  Jeffery Deaver

An American mystery/crime writer, Deaver earned a journalism degree (from the renowned U. of Missouri program), then went on to a law degree at Fordham before starting his writing career as a journalist.

Born on this date in 1950, Deaver said he gravitated toward journalism first because he was editor of his high school literary magazine and a reporter for the school paper.    But after some fulltime work on a newspaper, he switched back to law and practiced that before embarking on his very successful career and award-winning career as a novelist.

Deaver’s formula for successful writing is to first do an extensive outline.  “The outline is 95 percent of the book,” he said.   “Then I sit down and write, and (for me) that's the easy part.”   In fact, he said it’s so easy to write that oftentimes he does it in the dark.  “I can touch-type,” he added.   Virtually all of his works feature a trick ending or multiple 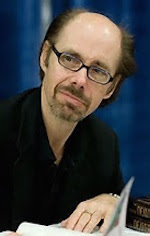 trick endings, a technique that has both endeared him to some readers and frustrated others.

“To answer that I have to describe what I think is my responsibility as a thriller writer: To give my readers the most exciting 'roller coaster ride' of a suspense story I can possibly think of.”

Share A Writer’s Moment with a friend by clicking the g+1 button below.
Posted by A Writer's Moment by Dan Jorgensen at 5:46 AM