“If people ask me for the ingredients of success, I say one is talent, two is stubbornness or determination, and third is sheer luck. You have to have two out of the three. Any two will probably do.” –  Fred Saberhagen


Born on this day in 1930, Saberhagen wrote science fiction and fantasy, and is most famous for his Berserker series of short stories and novels.  He also was one of the first writers to put together a series of vampire novels in which the vampires (including the famous Dracula) are the “good guys.”  “I used the same tools that make any writer good,” he said, “plus a cheerful willingness to suspend belief.”
A native of Chicago and a Korean War veteran, Saberhagen went to work for Motorola after the war and where he was at when he started writing fiction seriously at the age of about 30.   His first novel The Golden People came out in 1964 following a series of successes with magazine articles and short stories.  He said he was “filled with ideas” and just felt the urge to write every day.  “Ideas are everywhere,” he said.   “It's the paperwork, that is, sitting down and thinking them into a coherent story, trying to find just the right words that can, and usually does, get to be a writer’s labor.”
Still writing “serious science,” too, he served as editor and writer for all Chemistry articles in the Encyclopædia Britannica from the late 1960s through 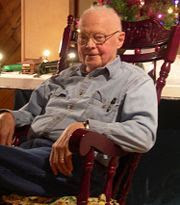 the mid-‘70s.  But, from that point until his death in 2007 he only wrote science fiction.

As for advice to aspiring science fiction writers, he said, “The advice would be the same as for any kind of fiction.  Keep writing, and keep sending things out, not to friends and relatives, but to people who have the power to buy. A lot of additional, useful tips could be added, but this is fundamental.”

Share A Writer’s Moment with a friend by clicking g+1 below.
Posted by A Writer's Moment by Dan Jorgensen at 5:14 AM