“Human life itself may be almost pure chaos, but the work of the artist is to take these handfuls of confusion and disparate things, things that seem to be irreconcilable, and put them together in a frame to give them some kind of shape and meaning.” – Katherine Anne Porter

A Pulitzer Prize-winning American journalist, essayist, short story writer, novelist, and political activist, Porter was born on this date in 1890.  Known for her penetrating insight, particularly in her short stories and essays, she wrote only one novel – but it was a good one!   Ship of Fools not only was a worldwide bestseller, it also earned her the Pulitzer, The National Book Award, and a box office hit movie.

She also won the National Book Award for The Collected Stories of Katherine Anne Porter, which I highly commend to you as a hallmark of short story excellence. 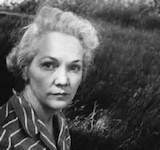 Writing short stories may have come as second nature to Porter, since her father’s cousin was William Sydney Porter – known to posterity as THE American short story writer O. Henry.  And, she was descended from American history, tracing her family tree to frontiersman Daniel Boone.

Katherine’s journalism career began on the East Coast, then gravitated to Colorado where she was writing for the Rocky Mountain News when she almost died during the 1918 flu pandemic. When she was finally discharged from the hospital, she was frail and completely bald and when her hair finally grew back, it was white and remained that way for the rest of her life.  Her life-and-death experience was reflected in her trilogy of novelettes led by the wonderful Pale Horse, Pale Rider.  That work earned her the 1940 Gold Medal for Literature from the Society of Libraries of New York University.
A prolific writer right up until her death in 1980, Porter advised young writers to look upon writing as an art AND a profession.  “Writing is a craft,” she said.  “Take an apprenticeship in it just like any other profession.”

Share A Writer’s Moment with a friend by clicking the g+1 button below.
Posted by A Writer's Moment by Dan Jorgensen at 5:43 AM