Taking an instant out of time

“Photography takes an instant out of time, altering life by holding it still.  The visual life is an enormous undertaking.” – Dorothea Lange

Born on this day in 1895, Lange influenced generations of Americans with her poignant photographic images that remain icons of the Great Depression.  Her photographs and accompanying writing about what she saw humanized the Depression’s consequences and influenced the development of documentary photography.

Her own pathway in life was hindered by two traumatic events, the first being the victim of polio at age 7, a disease that left her partially crippled for life.  Then Lange and her family were abandoned by her father when she was 12, spiraling them into poverty and forcing her to start working as a young teen, including a part-time job as a photographer’s assistant.    Simultaneously continuing her studies, she earned her high school diploma and enrolled at Columbia University where she formally studied photography. In 1918, she found a job as a photo finisher in San Francisco and embarked on the pathway to her eminent career.

In 1933, she was signed by the Roosevelt administration to begin documenting the lives of ordinary Americans and what they were going through to survive the Depression.  Her photos are still keys to our understanding of what many Americans endured.

Often exposed to harsh and unforgiving environmental conditions, she contracted esophogeal cancer and died in 1965.  But her work continues to be studied by generations of young photographers.  “A camera,” she said,  “is a tool for learning how to see without a camera.”  Thanks to  Dorothea Lange, we’ve been able to see deeply into America’s history and its soul. 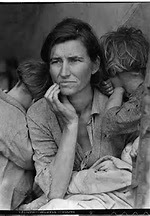 A PBS “American Masters” show on Lange, “Grab A Hunk of Lightning,” can be found at: http://www.pbs.org/wnet/americanmasters/dorothea-lange-about-the-film/3096/


Share A Writer’s Moment with a friend by clicking g+1 below.
Posted by A Writer's Moment by Dan Jorgensen at 5:29 AM