Writing for adventure and conservation

“Writing is sweat and drudgery most of the time. And you have to love it in order to endure the solitude and the discipline.” – Peter Benchley

Born on this date in 1940 – the same day that future Hall of Fame rock star Ricky Nelson was born – Benchley made his mark with the his breakthrough novel Jaws, subsequently made into a blockbuster movie by Steven Spielberg.  Several more of his works also were adapted for cinema, including The Deep.

Benchley was born to writing, the third generation of Benchley authors.  His father was Nathaniel and grandfather Robert, one of the founders of the famed writing group known as the Algonquin Round Table.  Despite that, Peter struggled to get his foot in the publishing door and nearly decided against it.  After working as a speechwriter for President Lyndon Johnson, he was knocking around as a part-time freelancer for several years before pitching his idea for Jaws, “one final attempt to stay alive as a writer.” The shark novel attracted Doubleday editor Thomas Congdon, who offered him an advance of $1,000 to put together the first 100 pages.

Much of the initial writing had to be rewritten as the publisher did not like Benchley’s style, but Jaws was published in 1974 and became a huge success, staying on the bestseller list for some 44 weeks. Spielberg said he initially found many of the 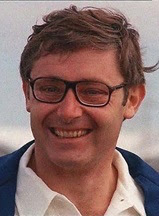 characters unsympathetic and actually wanted the shark to win.  Much of Benchley's writing beyond his novels was of conservation of our oceans.  That led to the establishment of the annual Benchley Awards, recognizing those who have dedicated their lives and work those conservation efforts.

Shortly before his death in 2006, Benchley said that while he didn’t have “personal” experience with a Great White Shark, much of everything else he wrote was based on something that happened to him or that he knew a great deal about.  “Ideas for my stories came to me based on my life.”  As for other writers, he added,  “I read very widely, both non-fiction and fiction, so I don't think there was any single writer who influenced me.”

Share A Writer’s Moment with a friend by clicking g+1 below.
Posted by A Writer's Moment by Dan Jorgensen at 5:57 AM