A writing (and writers') pioneer

“The biggest stories are written about the things which draw human beings closer together.” –  Susan Glaspell

A Pulitzer Prize-winning playwright, actress, novelist, and journalist, Glaspell founded – along with husband George Cram Cook – the Provincetown Players, America’s first modern American theater company.   During the Great Depression she served in the Works Progress Administration (WPA) as Midwest Bureau Director of the Federal Theater Project, created not as a cultural activity but as a relief measure to employ artists, writers, directors and theater workers during that terrible ordeal.

Born on this date in 1876, she was a prolific writer, producing 9 novels, 15 plays, over 50 short stories, and a biography.   She often set her semi-autobiographical stories in her native Iowa and was a leading writer on such contemporary issues as gender, ethics, and dissent, while featuring deep, sympathetic characters who took principled stands. 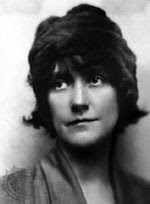 modern female playwright.  Her one-act play Trifles, written in 1916, is frequently cited as one of the greatest works of American theater.  It was adapted as a short story and 50 years later as a movie under the title A Jury of Her Peers.

Inspired by the great journalist Nellie Bly (one of my own inspirations), she was a reporter by age 18, then went on to study at Drake University where she got her first taste of “being on-stage,” excelling in male-dominated debate competitions.  She continued writing while in school and  the Des Moines Daily News made her its first full-time female reporter, covering the legislature and murder cases.

“I am glad I worked on a newspaper,” she later said,  “because it made me know I had to write whether I felt like it or not.  And I loved it!”

Share A Writer’s Moment with a friend by clicking the g+1 button below.
Posted by A Writer's Moment by Dan Jorgensen at 5:25 AM