Seeing the same words for the first time

“All my life I've looked at words as though I were seeing them for the first time.” –  Ernest Hemingway
When Hemingway’s birthday rolls around (he was born in July, 1899) I seem to be reading yet another volume from his books of letters.  I’ve been gratified to learn that there are about 20 more volumes to come, so I should be immersed in the words he chose to share with friends, acquaintances and even adversaries for as long as I hope to produce “Writer’s Moment.”

I like to say when doing talks or meeting writers’ groups that Hemingway was many things, some of them admirable, many not, but above all he was a great observer of life, of the human condition, and of nature.  And he was meticulous in his choice of words and his use of them.  “I rewrote the ending to Farewell to Arms, the last page of it, thirty-nine times before I was satisfied,” he said in one interview. 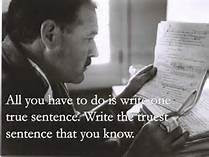 He often wrote by hand and would sit down each morning and completely re-read, edit and re-write whatever he had done the previous day before creating his next output.  Rarely satisfied with his first creation he said he was grateful for the opportunity to re-read each day, then read again when a typist had transcribed it, and finally to read the galley proofs before it appeared.

Sometimes chastised for being “too concise,” he said writers don’t need to be long-winded or flowery if they are effective with their word selections.   “If a writer knows enough about what he is writing about, he may omit things that he knows,” he said.  “The dignity of movement of an iceberg is due to only one ninth of it being above water.”