“One of the things that writing has taught me is that fiction has a life of its own. Fictional places are sometimes more real than the view from our bedroom window. Fictional people can sometimes become as close to us as our loved ones.” –  Joanne Harris
An English author, Harris is best known for her award-winning novel Chocolat which was later turned into an Oscar nominated film starring Juliette Binoche, Judi Dench and Johnny Depp. Her two dozen-plus books have won numerous awards, and now been published in more than 50 countries.  She’s also made a name for herself as a literary judge for a number of major writing awards.
Born on this date in 1964, Harris started 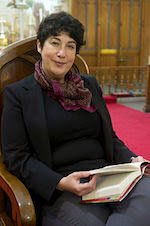 writing in elementary school and had  stories published while still in high school.  Early on her novels often were focused on mysticism, literary ghost stories and magic.  But after Chocolat’s success, she branched into a wide range of genres, including two books of short stories, a couple of cookbooks, including one in French, a fantasy based on Norse mythology, and several psychological thrillers.
“I like literature that you respond to in some way,” she said.  “You laugh, you cry, you turn the light on - that's great, it's eliciting a response by proxy. If you can actually get someone to sit on the edge of their seat and feel nervous if there's a knock at the door, then you've done something pretty terrific as a writer.”

Share A Writer’s Moment with a friend by clicking the g+1 button below.
Posted by A Writer's Moment by Dan Jorgensen at 6:14 AM