“Writing is like getting married. One should never commit oneself until one is amazed at one's luck” – Iris Murdoch

An Irish-born writer and philosopher (on this date in 1919) Murdoch grew up in London and made her literary name with novels about good and evil, relationships, morality, and the power of the unconscious.

After starting her writing career with a series of philosophical essays, she published her first novel, Under the Net, in 1954, and was immediately catapulted onto the international literary scene.  The novel was selected by both Time magazine and Modern Library as one of the 100 best English-language novels of the 20th century. 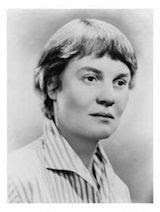 Murdoch went on to produce 25 more novels and many additional works of philosophy, poetry and drama.  Among her many awards were The Booker Prize, The Whitbread Literary Award for Fiction, and the James Tait Black Award.  Shortly before her death in 1999, she was awarded the Golden PEN Award for "a Lifetime's Distinguished Service to Literature.”

“We live in a fantasy world, a world of illusion,” Murdoch once wrote.   “The great task in life is to find reality”

Share A Writer’s Moment with a friend by clicking the g+1 button below.
Posted by A Writer's Moment by Dan Jorgensen at 5:12 AM