“Every writer must find a way of writing that tells the reader: This is me and no one else. The Voice can be idiosyncratic, but it cannot be obscure. It is a blend of style and content and intent and rhythm and pure personality.” –  Jeff Lindsay
Jeff Lindsay is the pen name of American playwright and crime novelist Jeffry P. Freundlich, best known for his mystery-suspense novels about sociopathic vigilante Dexter Morgan – the “protagonist” (so to speak) of the dark book and cable TV series Dexter.

Born on this date in Miami in 1952, Lindsay studied writing at Vermont’s Middlebury College and broke onto the writing scene with several moderately successful suspense and “What If?” novels in the mid-to-late 1990s.  Then he hit the jackpot with his first Dexter book, Darkly Dreaming Dexter in 2004, although he had almost given up on it before Black Lizard/Vintage took a chance.
“I didn't expect any success at all,” he said about the books.  “I was rejected by every publisher in the world and every agent in town.” 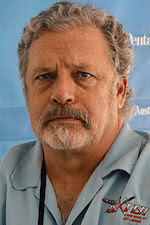 Since then he’s had 7 more books in the series, all huge hits.  The latest, Dexter Is Dead, was published late last year.
Many of his earlier published works include co-writer credit to his wife Hilary Hemingway, the niece of Ernest Hemingway and an author in her own right.  Like his wife’s famous uncle, Lindsay is concise and precise with his writing "voice" and style.  “Good writing," Lindsay said, "does not come from verbiage but from words.”

Share A Writer’s Moment with a friend by clicking the g+1 button below.
Posted by A Writer's Moment by Dan Jorgensen at 5:17 AM