That 'wonderful' sort of feeling

“It's a wonderful sort of feeling when people want to spend more time in a world you created.” –  Erin Morgenstern
Morgenson is one of the writing world’s rising young stars.  Born on this date in 1978, she also is a multimedia artist.  Her novel, The Night Circus, winner of the Locus Award for Best First Novel, spent 17 weeks as the number one book on the New York Times best-seller list.  It now has been published in more than a dozen languages.

Also is a testament to stick-to-it-iveness, Morgenson had more than 30 rejections before an insightful agent took on the book and got it published.  The rest, as they say…     A native of Massachusetts and graduate of prestigious 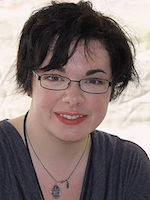 Smith College, she was a painter before a writer, studying both theater and studio art, and dabbling in magic – something that set the stage for her novel, which has been favorably compared with J.K Rowling’s Harry Potter series and works by Ray Bradbury.

“I am a fan of magic and fantasy, particularly when it's grounded in reality,” she said.  “I like the idea of having actual magic performed as stage magic, so you could assume that it was just a trick, that something is all smoke and mirrors, but there's that, like, feeling at the back of your mind: What if it's not?”
A self-proclaimed “binge writer,” she started writing as a participant in  “National Novel Writing Month” – where you pledge to write a 50,000-word novel (or more if the spirit moves you) in less than 30 days.   “I don't have as tight a time limit anymore, but I still write in long marathon sessions and then I won't write for a while,” she said.  “I'm definitely not a write-every-day writer.”

Share A Writer’s Moment with a friend by clicking the g+1 button below.
Posted by A Writer's Moment by Dan Jorgensen at 4:46 AM