To be a witness

“It's a journalist's job to be a witness to history. We're not there to worry about ourselves. We're there to try and get as near as we can, in an imperfect world, to the truth and get the truth out.” –  Robert Fisk

Born on this date in 1939, English writer and journalist Fisk grew up in the rural environs of England but became a reporter of the world.  Since 1976, he has been the Middle East correspondent for various media - but primarily for The Independent - working from Beirut, Lebanon, intermittently one of the “hottest” of the Middle East hotspots.

His reporting has earned him accolades from world leaders, the public, and his fellow journalists.  He has been voted British International Journalist of the Year seven times.   He’s also earned more British and international journalism awards than any other foreign correspondent and has published a number of books based on many of the wars and armed conflicts he’s covered. "I think it is the duty of a foreign correspondent to be neutral and unbiased on the side of those who suffer, whoever they may be."

Despite his reporting successes, Fisk said covering war and people’s suffering has taken a toll on his own well-being. 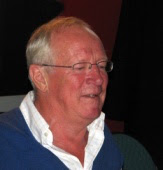 “I'm not sure whether I've been happy,” he said. “After my last book tour, I sat on my balcony with a cup of tea. I thought: 'You can't rewind the movie. I've spent more than half my life in the Middle East. There have been great moments, of course, but also great moments of horror, depression and loneliness.'”
Share A Writer’s Moment with a friend by clicking the g+1 button below.
Posted by A Writer's Moment by Dan Jorgensen at 5:22 AM