“The best writers who have put pen to paper have often had a journalism background.“ – Rick Bragg

Pulitzer Prize-winning journalist Rick Bragg was born on this date in 1959 in Piedmont, AL, and credits his development as a writer to his ability to be a good listener.  Bragg wrote for several small newspapers before gravitating to the New York Times where he became a national correspondent and then Miami Bureau Chief, covering the controversial story of young Cuban Elian Gonzalez and earning the Pulitzer for his efforts.

Among Bragg's best-known books are All Over But the Shoutin’, the story of his turbulent childhood in Alabama; and two high-profile biographies, one about POW Jessica Lynch I Am A Soldier Too, and the other about rock-and-roller Jerry Lee Lewis.

The winner of more than 50 writing awards, he is now a professor of journalism at the University of Alabama, and always hearkens back to journalism as a great foundation for any writer, a premise with which I fully agree.  Learning to be a reporter teaches attention to detail, how to deal with deadlines, how to “listen” to both what is being said and what is left unsaid, and how to organize a story so that it flows to a satisfying conclusion. 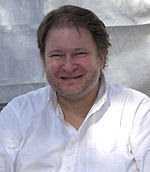 “People who think there is something pedestrian about journalism are just ignorant,” Bragg said.  “I don't think there's a difference between writing for a newspaper or magazine and doing a chapter in a book.”

Share A Writer’s Moment with a friend by clicking the g+1 button below.
Posted by A Writer's Moment by Dan Jorgensen at 4:56 AM