Observe life, then write it

And so she has.  Born this day in 1945, Creech is the first American to win both Britain’s Carnegie Medal for Children’s Books and America’s Newbery Medal – for her amazing Walk Two Moons.   Those two major international awards were just two of dozens of awards Creech has earned and convinced her to devote herself to writing full time, noting in her understated fashion, “There seemed to be an audience out there who wanted to read what I wanted to write.”

Her writing career, primarily aimed at the young adult market (although adults are a big audience for her works, too) has been focused on both novels and picture books. She embeds serious topics into her stories, including themes of independence, trust, childhood, adulthood, and death, but often softening the blow with her effective use of humor.

“One thing I'm interested in is what shapes us: the people? 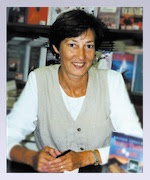 The place where we live? It's both of those and more. That's what I keep coming back to,” she said.

As for advice to new writers, she says, “Read a lot, live your life, and listen and watch, so that your mind fills up with millions of images.”

Share A Writer’s Moment with a friend by clicking the g+1 button below.
Posted by A Writer's Moment by Dan Jorgensen at 5:19 AM