“Writing is always a restorative process. It's like paddling a kayak. When you're writing, you can't do anything else. You're in the space you're in. So, in that way, it's enormously centering and restorative.” – Tabitha King

While critical reaction to her writing has been mixed, there’s only praise for King’s work on behalf of literacy and the importance of public broadcasting – both of which have occupied much of her time when she’s not writing.  That does not mean that Tabitha, the wife of author Stephen King, has not been devoted to the writing craft as well.  Over the years she has produced nearly a dozen novels, a number of short stories, 6 books of poetry, and 2 nonfiction books.

She and her husband also established the very active Stephen & Tabitha King Foundation  to help fund community-based projects that address the underlying causes of social and environmental problems, as well as those that address the consequences. “We have a strong interest in literacy, community services and the arts,” they said.

Tabitha King –whose birthday is today
– and and her husband Stephen met at the
college library at the U. of Maine where both 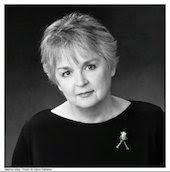 were student workers there.

Their support is aimed primarily at small communities in Maine, the “place” where they work and live, because as a place, Maine has shaped their lives and been their home for decades.  “Places are extremely important when writing a long story,” Tabitha said. “Place shapes a character.”

Share A Writer’s Moment with a friend by clicking the g+1 button below.
Posted by A Writer's Moment by Dan Jorgensen at 6:29 AM