Writing the landscape that shapes our lives 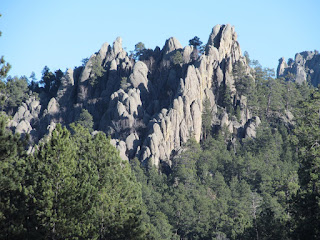 Near Harney Peak in the Black Hills (Photo by Susan Jorgensen)

“The natural world is the only one we have. To try to not see the natural world - to put on blinders and avoid seeing it - would for me seem like a form of madness. I'm also interested in the way landscape shapes individuals and populations, and from that, cultures.” - Rick Bass


A native of Texas, Bass, who was born on this date, is the son of a geologist and studied petroleum geology at Utah State University. He started writing short stories on his lunch breaks while working as a petroleum geologist in Jackson, Mississippi, and eventually gravitated toward environmental activism.  Today he and his wife, artist Elizabeth Hughes Bass, live in a remote area where he both writes and works on environmental issues.  He also is a well-known lecturer and teacher, often seen on television specials.

Among his more than two dozen books are the award-winning Where the Sea Used to Be, his short story collection The Lives of Rocks, and his autobiographical Why I Came West.  He was also awarded the General Electric Younger Writers Award, a PEN/Nelson Algren Award Special Citation for fiction, and a National Endowment for the Arts fellowship.  While he has an equal number of nonfiction and fiction works, he said approaching the latter genre’ is a more delicate proposition.

“I think a novelist must be more tender with living or 'real' people,” he said.   “The moral imperative of having been entrusted with their story looms before you every day, in every sentence.

“A novel that features real people is complicated, but in the end, that extra challenge is all for the good.”

Share A Writer’s Moment with a friend by clicking g+1 below.
Posted by A Writer's Moment by Dan Jorgensen at 6:13 AM