'Living' the story you read

“I think the job of writing and literature is to encourage each one of us to believe that we're living in a story.” –  Naomi Shihab Nye

Naomi Nye has carved out an impressive career in a wide range of genres, and is the  recipient of the NSK Neustadt Prize for Children’s Literature.  Her writing includes short stories, novels, poetry and songwriting.

A self-proclaimed "wandering poet," primarily because she has traveled the world to lead writing workshops and conduct inspirational talks, she lives in San Antonio – where she earned a degree in English Literature at Trinity University.  Her writing career began as a child growing up in St. Louis, MO, the daughter of an American mother and Palestinian father, both writers themselves.   It was her mother’s encouragement that led her to start writing in 1st grade, her first poem being published at age 7.

Among Nye’s most notable works is the terrific Young Adult novel Habibi, the story of a 14-year-old girl and her Arab father and American mother who move from a home in St. Louis to live in Palestine, mirroring a time in her own life.    The semi-autobiographical piece, the title of which means “beloved,” addresses a wide 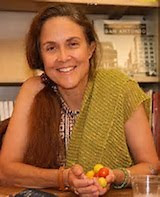 range of themes sincluding change, family values, war, peace and love.  The book has won multiple awards including being named by the American Library Association as one of the best books for Young Adults written in the 20th Century.

Nye’s writings often are connected to her experiences as an Arab-American.   And, she said she finds herself amazed by the vitriolic language she often encounters in our society and politics.  “I keep thinking, we teach children to use language to solve their disputes. We teach them not to hit and fight and bite,” she said.  “Then look what adults do!”

Share A Writer’s Moment with a friend by clicking g+1 below.
Posted by A Writer's Moment by Dan Jorgensen at 6:14 AM