As 'normal' as speaking

“I think we have a great deal of mythology around writing. We believe that only a few people can really do it. I wrote a book called 'The Right to Write.' In it, I argued that all of us have the capacity to write. That it's as normal to write as it is to speak.” – Julia Cameron
Teacher, author, artist, poet, playwright, novelist, filmmaker, composer, and journalist, Cameron is most famous for both her teaching and her many books on writing and creativity, beginning with her best-selling 1992 book The Artist's Way.  Since then she has written a remarkable 30 nonfiction books, 2 novels, 6 plays and 4 books of poetry.  She also has written many short stories, essays and screenplays.

“I grew up in what you might call a relentlessly creative household,” she said.  “We were given art supplies, music supplies... Our mother knew enough to get us started and then stand back and not meddle. My parents never said to us, 'Don't you think you'll need something to fall back on?' They acted as though creativity was completely normal.”

Born on this day in 1948, she grew up in Chicago, went to college in New York and started her career as a writer at the Washington Post before moving over to Rolling Stone magazine.  It was there that she met director Martin Scorsese and after a fairly 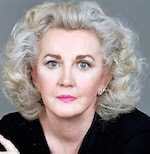 tumultuous marriage, they divorced but continued a close relationship, including collaborating on three films.
“I have learned, as a rule of thumb, never to ask whether you can do something,” she said about her successful writing and teaching career.  “Say, instead, that you are doing it. Then fasten your seat belt. The most remarkable things follow.“

Share A Writer’s Moment with a friend by clicking g+1 below.
Posted by A Writer's Moment by Dan Jorgensen at 6:02 AM