Setting your own course...and style

“When you write it doesn't occur to you that somebody could think different from what you do.” – Howard  Nemerov
Nemerov twice was Consultant in Poetry to the Library of Congress, from 1963 to 1964 and again from 1988 to 1990, basically serving as the the U.S. "poet in chief."  He was thrice-honored for his The Collected Poems of Howard Nemerov, winning the National Book Award for Poetry, the Pulitzer Prize for Poetry, and Bollingen Prize.  The Bollingen is a literary honor bestowed by Yale University on an American poet in recognition of the best book of new verse and for lifetime achievement. 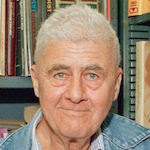 Nemerov, 1920-1991, was one of our most-honored poets and also considered one of our “most readable.”  A teacher in high school and college and at workshops around the country, he said he always enjoyed talking to kids and learning that they liked reading his work.  “I liked the kid who wrote me that he had to do a term paper on a modern poet and he was doing me because, though they say you have to read poems twice, he found he could handle mine in one try,” Nemerov said.

Droll humor marks many of his poems.  Here, for Saturday’s Poem, is Nemerov’s
Found Poem
after information received in The St. Louis Post-Dispatch, 1986

The population center of the USA
Has shifted to Potosi, in Missouri.

The calculation employed by authorities
In arriving at this dislocation assumes

That the country is a geometric plane,
Perfectly flat, and that every citizen,

Including those in Alaska and Hawaii
And the District of Columbia, weighs the same;

So that, given these simple presuppositions,
The entire bulk and spread of all the people

Whence the company got the lead out and left.
'It gets pretty lonely here,' he says, 'at night.'

Share A Writer’s Moment with a friend by clicking g+1 below.
Posted by A Writer's Moment by Dan Jorgensen at 5:18 AM