Born on this date in 1952, Alice Hoffman has had a terrific career as a writer of both adult and young adult books, many of which take on elements of “magic realism,” a genre’ she is sometimes credited with helping create.   She also likes to throw in non-standard romance and relationships, making her stories even more interesting and delightful for readers of all ages.

While still an undergraduate at Stanford, where she also earned a master’s in creative writing, she penned the acclaimed short story At The Drive-In, published in the literary magazine Fiction.  And Editor contacted her and asked whether she had a novel, too. She didn’t but said she’d be glad to try writing one.  The result was the best-selling Property Of published in 1977.  And the rest, as they say, is history.  Since then she’s had 2 dozen more adult novels, a dozen young adult and kids’ books, a nonfiction book and many other short stories and essays.

And, every single one of her books has been optioned for movie rights, so she’s ended up writing many screenplays to add to her amazing resume’.  Despite this success, she said, “I never see a novel as a film while I'm writing it. Mostly because novels and films are so different, and I'm such an internal novelist.”  Among her more recent successes in both print and film are The River King and The Dovekeepers. 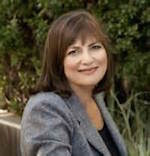 Unlike many writers, she said she doesn’t do much reading.   “A lot of what I was looking for as an escape (in reading) I find in writing. And the other thing is that I don't want to get into someone else's language when I'm working.”  Her success in putting a bit of herself into each character is another key to her success.  “After a while, the characters I'm writing just begin to feel real to me. That's when I know I'm heading in the right direction.”

Share A Writer’s Moment with a friend by clicking g+1 below.
Posted by A Writer's Moment by Dan Jorgensen at 6:20 AM