That ancient and honorable act

“Storytelling is an ancient and honorable act. An essential role to play in the community or tribe. It's one that I embrace wholeheartedly and have been fortunate enough to be rewarded for.” –  Russell Banks

Born on this date in 1940, Banks is an American writer of fiction and poetry and perhaps best known for his "detailed accounts of domestic strife and the daily struggles of ordinary often-marginalized characters.”  His stories usually revolve around his own childhood experiences (growing up in poverty), and often reflect "moral themes and personal relationships.”

A winner of the John Dos Passos Award for creative writing, his works have now been translated into some 20 languages and earned numerous international awards.  Two of his books – The Sweet Hereafter and Affliction – not only became international best-sellers but also were made into successful feature films. 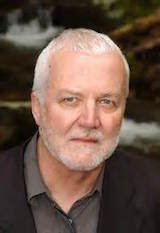 “There are people like me who want to be writers because they love to write,” he said.  “…My life has now been shaped by my writing,”

Share A Writer’s Moment with a friend by clicking g+1 below.
Posted by A Writer's Moment by Dan Jorgensen at 6:59 AM