Beginning at the end

“Titles are important; I have them before I have books that belong to them. I have last chapters in my mind before I see first chapters, too. I usually begin with endings, with a sense of aftermath, of dust settling, of epilogue.” – John Irving


Novelist and Academy Award-winning screenwriter Irving, who turns 74 today, first achieved critical and popular acclaim with the international success of 1978’s The World According to Garp.   Since then he has had many other best sellers and also had 5 of his novels, including the Academy Award-winner The Cider House Rules, adapted to film.

Irving started writing fiction at age 26, had only limited success and became a college professor before writing Garp and earning worldwide acclaim.  Of his 14 novels, 4 have reached number one on the New York Times Bestseller List, and
said all of his books grow out of his development 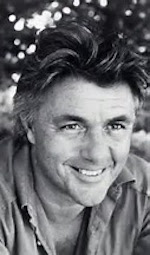 of the endings first – not necessarily a unique style but one that has paid big dividends for him.
“I write the last line, and then I write the line before that,” he said.  “I find myself writing backwards for a while, until I have a solid sense of how that ending sounds and feels. You have to know what your voice sounds like at the end of the story, because it tells you how to sound when you begin.”

Share A Writer’s Moment with a friend by clicking g+1 below.
Posted by A Writer's Moment by Dan Jorgensen at 5:21 AM