Let your 'self' shine through

Jakes, who was born this day in 1932, gained widespread popularity with the publication of his Kent Family Chronicles, which became a bestselling American Bicentennial Series of books in the mid-to-late 1970s.  The books sold an amazing 55 million copies.

He has since published several more popular works of historical fiction, most dealing with American history, including the North and South trilogy about the U.S. Civil War, 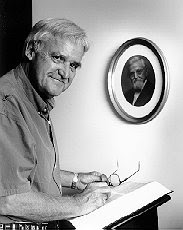 which sold 10 million copies and was adapted as an ABC-TV miniseries.

A native of Chicago, Jakes started writing while studying the craft at DePauw University and he has now penned 55 novels and 4 nonfiction books, including a terrific book on Famous War Correspondents and another on Famous “Firsts” in Sports.

I loved the Bicentennial Series and was shocked when none were made into either some type of movie, but perhaps they had too much breadth and scope to make them easily “filmable,” something I’ve learned can make or break a book’s being adapted into a film.  Simple, as the old saying goes, is good.  And, as Jakes likes to say:

“No writer should minimize the factor that affects everyone, but is beyond control: luck.”

Share A Writer’s Moment with a friend by clicking the g+1 button below.
Posted by A Writer's Moment by Dan Jorgensen at 8:16 AM