Letting you 'live' within the story

“There are certainly times when my own everyday life seems to retreat so the life of the story can take me over. That is why a writer often needs space and time, so that he or she can abandon ordinary life and 'live' with the characters.” –  Margaret Mahy


Born on this date in 1936, Mahy wrote more than 100 picture books, 40 novels and 20 collections of short stories. She is among a select few writers to win the biennial, international Hans Christian Andersen Medal for her "lasting contribution to children's literature.”


A native of New Zealand, she grew up with an oral tradition shared by her bridge builder father who spent hours telling his children stories – both true and imagined.  She said he was a great influence on her writing.  Her mother, who was a teacher, encouraged her to read and got her interested in library science, a profession she thought would be her career until she tried her luck at writing.  In 1965, she wrote her first book, A Lion in the Meadow, and it took off like a rocket.

Her other best-known stories were The Haunting and The Changeover.  Her works have now been translated into 15 different languages and sold millions.    Mahy was named for the prestigious Order of New Zealand and then honored by the New Zealand Children’s Book Foundation with an award named in her honor.   “The Margaret Mahy Award,” first presented to her in 1991, is given annually to "a person who has made a significant contribution to the broad field of children's literature and literacy.”


Margaret Mahy at her 75th birthday 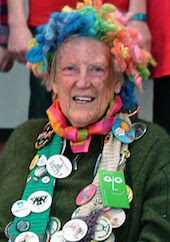 wearing her “rainbow wig”
“Reading is very creative - it's not just a passive thing,” she said shortly before her death in 2012.   “I write a story; it goes out into the world; somebody reads it and, by reading it, completes it.”

Share A Writer’s Moment with a friend by clicking g+1 below.
Posted by A Writer's Moment by Dan Jorgensen at 6:25 AM