The heart and core of things

“For books are more than books, they are the life, the very heart and core of ages past, the reason why men lived and worked and died, the essence and quintessence of their lives.” – Gene Fowler

A “thought for the day” from longtime journalist, screenwriter and novelist Gene Fowler, who was born in Colorado on this date in 1890.  During his lifetime (he died in 1960) he wrote 20 books, several plays and a couple dozen movie scripts while simultaneously serving as syndication manager for King Features – a major newspaper service.

I first learned about Fowler when researching my book And The Wind Whispered because of his interviews and connections with Buffalo Bill Cody, a key character in the book.  Fowler also was close friends with actors John Barrymore and W.C. Fields and did one of the best books ever written about Jimmy Durante, Schnozzola.
Gene Fowler 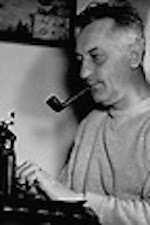 He said his philosophy for success was simple.  “Just believe in yourself and your abilities.  It is always easier to believe than to doubt.”