“My job as an author is to tell the story in the best way possible, to make it flow seamlessly and get the reader to keep turning the page.” – Patrick Carman

A native of Oregon who now lives in eastern Washington, Carman was in advertising until 2003 when he began writing for children and young adults – a prolific and award-winning venture.  Carman is a multimedia pioneer who uses technology, videos, and games to bring wired kids back to books. Millions of young readers have read, watched, and "played" books Carman has produced.

Also a noted public speaker, he presents at national events throughout the year including the National Book Festival, the LA Book Festival, and the School Library Journal Summit. He has also spoken to hundreds of thousands of students at over 1,200 schools across the country.   And, he started an annual event in his own hometown, “Walla Walla Kids Read,” as a blueprint for literacy in rural communities.

“I travel to a lot of schools, and I see firsthand that while we do still have a lot of traditional readers, we don't have as many as we used to. And we're missing an awful lot of kids entirely... Do I want to get rid of the Internet?    No.  Obviously, I don't want 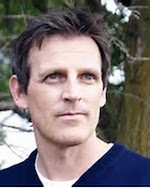 that because of all the amazing things it brings.”
While he didn’t “officially” start writing until nearly age 40, he said he’s written for years and has drawers full of stories.

“I remember all the way back in high school thinking about writing books,” he said.  “And, in fact, I've written a lot of stories. I've got dozens of stories I've written that no one's ever seen.”  Kids everywhere are hoping he'll pull them out and share them.

Share A Writer’s Moment with a friend by clicking g+1 below.
Posted by A Writer's Moment by Dan Jorgensen at 6:10 AM