Hungrily involved in solving the crime

“In a mystery, the sleuth must be believably involved and emotionally invested in solving the crime.” – Diane Mott Davidson
Mystery writer Davidson, who celebrates her birthday today, took a page (so to speak) out of author Robert B. Parker’s writing guide and decided to develop her ideas for mysteries around her two great loves – writing and recipes.  Thus, her novels use the theme of food and include several food or drink recipes within their pages.  On top of that, she utilizes clever titles that are a play on either a food or drink word, such as Dying for Chocolate, The Grilling Season, Killer Pancake and The Whole Enchilada (my personal fave).

Her protagonist, Goldy Schulz, is a small town caterer based in Colorado (also where Davidson resides) who solves mysteries on the side. 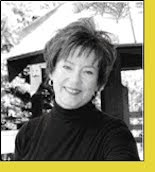 A native of Virginia who started writing while she was a student at Wellesley living across the hall from Hillary Rodham – today known as Hillary Rodham Clinton – Mott Davidson said she actually tried catering for a while and found it “exhausting.”  She honed her cooking skills after transferring from Wellesley to Stanford.  “If you don’t have much money, you have to learn to cook.”

As for her advice to new writers, she said write for the love of it and that’s when you’re most likely to succeed.  “The thing is, if you make best-sellerdom your goal, you're going to be in trouble.  It's a very nice thing to have happen, but if one makes that a goal like, say, a literary writer has the goal of getting the Pulitzer Prize, that's so unpredictable.”

Share A Writer’s Moment with a friend by clicking g+1 below.
Posted by A Writer's Moment by Dan Jorgensen at 6:10 AM