“I wish somebody had given me the news that ideas don't just fall on your head like fairy dust. You have to treat that like a job. You have to spend hours each day, where you're just like, 'This is the part of the day when I'm looking for an idea.'” –  Ira Glass

Ira Glass, born this day in 1959, is a Baltimore native who has virtually grown up in and spent his life in public radio.  He started on NPR in Washington, DC, as a teenager.  After learning the ropes under most of NPR’s early leaders, he became a reporter on most of the major shows like Morning Edition and All Things Considered before starting This American Life in 1995.  He has hosted that show ever since and is noted for the in-depth and well-researched stories that he tells.
“I'm not a natural storyteller at all. If anything, I'm a natural interviewer, a natural listener, but I'm not a natural storyteller,” he said.    Despite that disclaimer he has received the Edward R. Murrow Award for Outstanding Contributions to Public Radio, the George Polk Award in Radio Reporting, and the Medal for Spoken Language from the American Academy of Arts and Letters.  In 2014 he was inducted into the National Radio Hall of Fame. 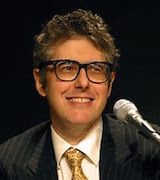 As for his writing, he said he learned the craft by watching others who he admired, something he highly recommends to young writers.